Rupert Murdoch controls 130 newspapers, owns 50% of 16 others, has digital media sites for most of them and publishes some 30 magazine titles throughout Australia.

Numerous reports say that in the 1972 federal elections Murdoch used his newspapers to support Gough Whitlam and the Australian Labor Party. By 1975 he had turned against Whitlam over concessions for a mining operation and his request to be appointed High Commissioner to the UK. He also supported current Labor Prime Minister Kevin Rudd between 2007 and 2009.

Murdoch’s newspapers and other Australian media became hostile towards Labor around the time of its parliamentary Caucus voting Julia Gillard into the role of leader and Prime Minister in 2010. Gillard introduced a carbon price as a first step towards a carbon trading scheme. 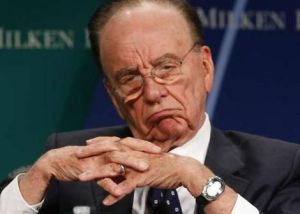 In the UK, News Corp’s newspaper and satellite TV interests have been damaged by revelations of a phone hacking scandal, with sackings, arrests and inquiries affecting and compromising key executives, senior police, a Prime Ministerial adviser and the Prime Minister himself. There have been 32 arrests associated with the scandal.

In the USA, it was recently revealed that Murdoch had attempted, through a senior director of his Fox News, to recruit former US Army general David Petraeus to run as a candidate in the 2012 Presidential election. Petraeus declined, accepted the position as head of the CIA and, a year later, resigned when details of a sex scandal were revealed.

Former Washington Post reporter Carl Bernstein said a taped conversation of the attempt to recruit Petraeus was “… a testament to the willingness of Murdoch to run roughshod over the American civic and political landscape”.

In Australia, prominent News Corp newspaper journalists have been openly supporting federal Liberal Opposition Leader Tony Abbott in a relentless campaign to bring down the national Labor government. On Channel Ten, the Sunday morning show The Bolt Report is clearly unbalanced and biased towards the Liberal Party. Ten’s Meet the Press (hosted by journalist and economist Kathryn Robinson), rarely manages to offset the bias of The Bolt Report. [addendum, 12/04/2014. Meet the Press was dropped in 2014 and The Bolt Report extended to one hour, including a Media Watch segment.]

Some News Corp newspapers, notably Brisbane’s Courier-Mail and the Hobart Mercury, occasionally run an article that is critical of the federal Liberal Opposition. While Murdoch claims he does not direct editorial policy, some of his former and current editors have publicly said he manages to give a clear message on the kind of story or angle that he prefers, usually adding a comment, to the effect, “you ignore these messages at your peril”.

Rupert Murdoch gave up his Australian citizenship in September 1985 so that he could buy Twentieth Century Fox Film Corp, which culminated in the development of Fox Inc, a controversial TV news broadcaster. He is now 82 and reported to be suffering from prostate cancer.

Early in May this year a UK Parliamentary Committee investigated the phone hacking scandal involving Murdoch (and other) newspapers and found Murdoch not a “fit” person to run a major international company. The use of the word “fit” could have implications for Murdoch’s plans to renew his bid to completely take over BSkyB — Britain’s biggest TV and ‘phone company. Murdoch told a committee hearing his appearance before it was “the most humble day of my life”. Some months later he was recorded at a London newspaper staff meeting, heaping scorn on Parliament, its inquiry and the police force investigators. He has been called before the committee again to explain himself.

The committee report (which divided along party lines) was also critical of Murdoch’s son James, whom it described as “wilfully ignorant” regarding the size of payouts to phone hacking victims. Three other executives may be called before Parliament to apologise for misleading a Parliamentary hearing.

The question for Australia in 2013 is how much political influence should be allowed to the US citizen Rupert Murdoch through his extensive ownership of communication outlets. It should be recognised that a casual comment in a motoring magazine, a home-maker magazine, a news bulletin, a one-on-one interview or a panel discussion can influence someone’s political thinking.

The results of a Google search on the story: http://bit.ly/ZzisNA

Follow this link to see the enormity of the Murdoch empire: http://en.wikipedia.org/wiki/List_of_assets_owned_by_News_Corporation

Inside Story is an online publication dealing with current affairs and culture in Australia and beyond. On April 8, 2014, Inside Story ran an in-depth report on Murdoch’s media empire dealing with succession, which he has handed to eldest son Lachlan.

The story backgrounds the successes and failures of Lachlan and his brother James, details hostility between senior executives and Lachlan and refers to rivalry between Lachlan and James. Hovering in the background are the two sisters, Elisabeth and Prudence.

The overall impression is that Murdoch’s empire will pass into shaky hands when he finally decides to stand down.

I learnt today (12/04/2014) that while Murdoch’s Fox news may leak broadcasts across the USA/Canada border, or via rebroadcasts by Canadian TV stations, it has not been able to migrate into Canada as a registered broadcaster. The reason is that Canada has a law that prohibits and punishes lies in broadcast news bulletins. In February 2011, the Canadian legislature blocked a bid by the Right-wing Prime Minister, Stephen Harper, to repeal the law.

In mid-2014 Murdoch made a takeover bid for Time Warner. In an 18 July, 2014 article in The New Yorker, Ken Auletta revealed the fundamental flaw that caused the bid to fail.