The Institute of Public Affairs (IPA) is not a secret organisation, it’s just that no one wants to talk about it.

By no one, I mean our main source of news and current affairs: the mainstream news media (MSM), commercial newspapers, radio and TV and the ABC/SBS.

Now that it’s too late, some bloggers and journalists who have migrated from the MSM to online newspapers and magazines are beginning to reveal more about the IPA.

By too late, I mean the dreaded Mad Monk (Tony Two Face, the IPA Hit Man) is now running the country and steadily implementing the IPA’s policy program.

What has happened since the 7 September, 2013 federal election makes it clear why Abbott did not reveal his policies before the election. His policies are those of the IPA and they are not the kind of thing you would want to talk about in an election campaign.

They are not the kind of thing the MSM advised the voters about prior to, during or since the election campaign. Talks of savage cuts here, there and everywhere were spoken of as necessary to deal with a “Budget Emergency!”

To a large degree, the MSM does not want to talk about the fact that the “Budget Emergency!” is totally false and created in order to justify the savage, ideological, cuts contained in the new government’s first Budget.

Such is the nature of the commercially operated MSM (ABC/SBS excepted), the IPA and the “Liberal”, neoConservative, Libertarian or Tea Party whatevers who are now in charge of our economy and our once-decent society.

The real crisis is structural — how our governments go about taxing things, the archaic structure of taxation policy and the fact that the politicians haven’t got the guts or the will to modernise the entire system. The “Liberals” are working on a taxation White Paper — I’ll make sure I have my seat belt fastened before I read that one.

The job of revealing and discussing the true budgetary position has been largely left to expert commentators in the alternative news media, the Fifth Estate, especially the academically sourced TheConversation.com.

The IPA, formed in 1943, was instrumental in helping launch the Liberal Party of Australia the following year. The IPA is funded by memberships, donations and corporate sponsorships. It is today rightly seen as the policy formation wing of the Liberal party, as stories in this blog, in The Sniper and the items listed below show.

Although the IPA has a public face via the frequent appearances of its spokespersons on ABC programs and websites, the tragedy is that the ABC has only once taken the trouble to make it clear who and what the IPA is and what it represents (in a Media Watch segment).

The latest revelations on the IPA come from former MSM journalist Mike Seccombe, in an article in today’s The Saturday Paper. Seccombe reveals some of the IPA’s other nefarious activities, such as posing as a friendly representative of the environment movement and trucking owner/operators.

On 25 August, 2013 Fairfax’s Melbourne newspaper The Age published a lengthy story claiming some of the world’s largest companies have dropped financial support and membership of the IPA. The story said the changed attitude towards the IPA was due to “concern at its vociferous campaign against action on climate change”.

On the same day The Age published a detailed article on the IPA’s development* over the decades and its present position.

At the IPA’s 70th anniversary dinner last year, Abbott told guests he would adopt 10 of the then 75 items on the IPA’s agenda to change the shape of Australian society.

These items were not put before the electorate for its consideration. Instead, voters were promised a number of items that would not be changed. Abbott has since reneged on every single thing he promised not to cut and has so far failed to deliver on some things he promised to do. 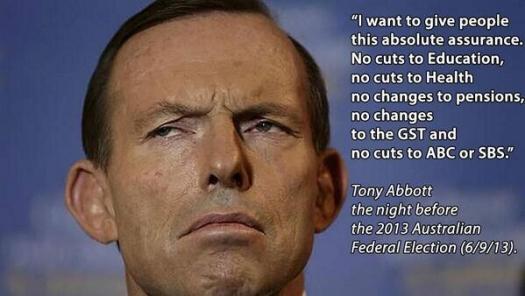 Work has started on some of his “roads of the 21st Century” and while the boats have slowed (due to Labor’s policy of denying settlement in Australia) or been turned back (due to the Liberal’s Operation Sovereign Borders policy) they are still coming, but not “arriving”.

On 6 September, 2013 Crikey’s Andrew Crooke surveyed the IPA’s agenda list (which had grown to 100 items) and wrote about what might happen to each item.

Earlier this week, Glen Murray produced a blog on the IPA that is similar to Andrew Crooke’s story, but shows (with links) which of the IPA’s 100 items have been endorsed or enacted by the LNP coalition government.

Murray’s blog makes it clear that the IPA is the policy forming wing of the Liberal party.

It’s way past time for the commercially operated MSM to do the job that’s expected of it and inform its readers, listeners and viewers of who and what the IPA is and who is now really running this country.

It would be helpful if the ABC would describe the IPA as a Right-wing Liberal party policy formation unit and provide a suitably descriptive caption for its other guests on current affairs programs on radio and TV.

More information on people past and present involved in the shadowy world of the IPA is contained in Tim Wilson and the Institute of Public Smokescreens, an article published by Independent Australia.

I have asked the IPA’s policy director, Chris Berg, for his notes or research on IPA item 77: Allow the appointment of Ministers from outside the parliament. I asked only once and I have had no reply.

This federal LNP government, like the LNP state government in Queensland, has adopted the practice of setting up commissions to inform the government on policy alternatives. Commission members tend to be LNP cronies who largely tell the government what it wants to hear. Their reports are described as “reports to the government, not reports of the government”. The practice allows a certain amount of hand-washing when it comes to implementing policy.

The USA Centre for Media and Democracy has a website devoted to exposing ALEC.

Another source of IPA policies could be the USA’s right-wing think tank the National Centre for Policy Analysis (NCPA), an organisation that is similar to the IPA.

Here are the results of two Google searches for ALEC and NCPA, if you want to conduct further research: ALEC | NCPA

ALEC and NCPA are just two of a collection of lobbyists that are influencing government policy formation in the USA. These organisations are more organised and more powerful than anything a political party or citizens group can organise. Their founders and members exhibit a “blood-lust” and determination that I have often seen in corporate executives. This may be why they are winning the game. Corporates have a win by any means mentality while ordinary citizens are just too busy coping with life to do much about it.

Two years ago an American web site, Truthout, produced a lengthy article describing several of these US lobbyists and the methods they use. We can see this is beginning to happen in Australia.

The academically based and authored TheConversation.com has produced a series of articles under the general heading Remaking Australia on the eve of the federal LNP government’s first year in office. Not part of that series, but equally relevant, is another TheConversation article: Changing the soul: are conservatives the new radicals?